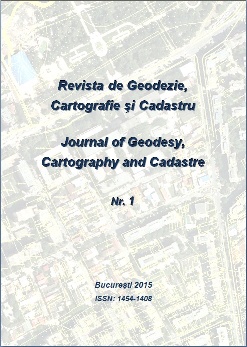 Abstract
This paper presents the evaluation of measurements on bridge structures with a profile scanner and shows that existing concepts of classical monitoring measurements can be extended with the use of profile laser scanning. The contact-free acquisition method of profile laser scanners reduces the expense for personnel and instrumentation compared to conventional sensors used for the monitoring of civil engineering structures. It furthermore enables the measurement of non-accessible areas of the monitored supporting structures. In addition, the availability of information along an entire structural profile can be used to flexibly deal with a wide variety of problems. With a measurement rate of at least 50 Hz, typical structural deformation signals can be recorded and sufficient data can be collected to characterize the underlying deformation processes dependably.
Overall, an automated and efficient spatio temporal processing scheme is presented, which is based on the discrete wavelet transform. With this signal analysis tool outliers are detected and eliminated, but furthermore an automated structural analysis based on the details of the supporting structures surface is realized.
In addition to the derivation of deformations, a quality assessment with comprehensive integration of the redundant measurement information is possible as an in-situ uncertainty determination.

Abstract
Angle readings from Robotic Total Stations (RTS) can be acquired with a very high update rate in comparison with the update rate of the distance measurement. For short ranges these readings can be considered more accurate than the distance measurements. The currently presented system makes use of this feature and combines measurements captured from two Leica high precision RTS that have Automatic Target Recognition (ATR) sensors in order to determine the position of a moving reflector in real time based solely on angles. Both RTS are stationed in the same coordinate reference frame and controlled by a central computer running a LabVIEW program. It retrieves the angle measurements and calculates the current position of the moving reflector based on angle intersection principles. This increases the positioning frequency of the RTS system to 20 points/second, which is twice as fast as the normal tracking mode of these specific RTS. A miniature railway and trolley are used to move the studied reflectors.
In the first tests, different positions of reflectors placed on a stationary trolley are determined and compared to positions coming from classical measurements of angles and distances. The differences are in this case less than 1 mm. Further experiments, present the achieved position in kinematic mode by means of lateral deviations to a reference line, leading to an average value of 2.1 mm for the 360° reflectors and 3.3 mm for a normal reflector.

Abstract
The National Oceanic and Atmospheric Administration's (NOAA) National Geodetic Survey (NGS) will be updating the National Spatial Reference System (NSRS) for the United States in 2022. Four Terrestrial Reference Frames (TRF's) will be defined based on the available ITRF in 2020. Euler Pole Parameters (EPP) will be determined for each frame to capture most of the horizontal plate motion. An Intra-Frame Velocity Model (IFVM) is required to account for any residual horizontal and all vertical motion within these frames. These are essentially deformation models but can be extended across the plate boundaries for practical purposes. Hence, the use of Intra-Frame instead of Intra-Plate. This paper will cover significant aspects of the IFVM that rely on increasingly sophisticated (and complicated) techniques for capturing the motion within each TRF. Simply gridding the National CORS network is the easiest and least accurate approach. The most complicated and potentially most accurate would be the use of InSAR. NGS must select the most cost-effective and accurate mechanism within the next few years to have the IFVM in place by 2022.

Abstract
The church tower in Herrenberg (nearby Stuttgart) was monitored with leveling to identify the vertical sinking of the church tower. In recent years, some new cracks have been found on the church tower walls which could have been caused by the horizontal deformation of the church tower. To identify the both horizontal and vertical deformation of the church tower, Low Cost GNSS receivers were used. The key limitation factor for accuracy of GNSS (for short baselines) is the multipath effect. Besides, the antenna is very close to the tower walls. For this reason, the influence of the multipath effect will be analyzed and mitigated. Two measurement sessions were realized in May and July 2018, a deformation analysis was done. There are about 5% outliers in the time series, the 3 dimensional standard deviation of single measurement is about 20 mm. After reducing the multipath effect, the 3 dimensional standard deviation of single measurement is improved by about 45%. Deformation analysis shows significant deformation in the north and height component, although there should no significant movement between two sessions, since the movement is very slow and there is only about two months between these two sessions.

Abstract
IMUs (Inertial Measurement Units) are widely used in many robotics applications. Proper calibration is inevitable to ensure usable results in sensor fusion and/or other estimation methods. Numerous sensor models for IMUs can be found in literature. These are investigated from two point of views: How well can the parameters of these models be determined? And how does they influence tilt/inclination estimation with IMUs.
In the first part several sensor models differing in the number of calibration parameters are analyzed in a simulation environment. We investigate two calibration methods: a) multi-position gravity-based calibration method without the need of external equipment, and b) a calibration routine aided by an industrial robot.
In the second part the influence of these calibration parameters on tilt estimation is examined. The well-known leveling equations using accelerometer measurements of gravity for inclination angles determination are used. This method is analyzed using variance based sensitivity analysis to identify important input parameters and to optimize the model/system.

Abstract
The over-exploitation of non-renewable resources for energy demands is a serious issue. Convergence towards renewable resources such as solar energy is need of the day. Solar energy is the cleanest form of energy available on Earth. The objective of this research is to extract the building rooftop from the satellite images using a k-means clustering algorithm to identify the usable area for solar potential assessment. The scenes of World View-3 and Google Earth are segmented into nine parts and the algorithm implemented in Matlab is applied to the individual parts for better utilization of computing resources. This approach has been applied to the Har Ki Pauri, Haridwar that is situated in the northern part of India for solar potential assessment in a fast and accurate manner. The Global Horizontal Irradiance (GHI) data obtained from the database of National Renewable Energy Laboratory (NREL), United States have been used in the solar potential assessment. The validation of the solar potential obtained has been performed using pyranometer data. For the validation purpose, the above mentioned algorithm has been compared with the digitization in QGIS software. The results obtained from the above mentioned algorithm developed have extracted 85% to 90% of the features in the satellite image. The developed algorithm has given best results with the World View-3 (high-resolution image) than the other coarser resolution scenes. The developed approach is helpful in evaluating the feasibility of the large areas for solar potential assessment. This methodology is useful for the implementation of different government’s solar energy generation schemes for rural and hilly areas. It helped in estimating the solar potential of the large hilly area for electricity generation. This approach is useful for a larger area as it computes the usable area by dividing the scenes into smaller parts and applies the algorithm individually to each part of the scene.